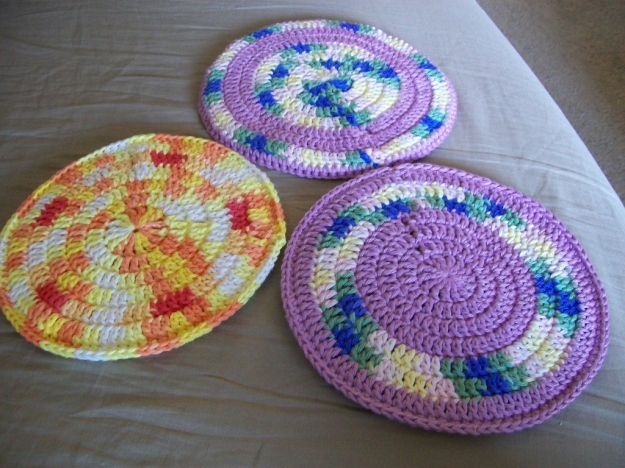 Today’s pattern is an easy crochet potholder. As I mentioned in my last journal post, I recently got a big bag of cotton yarn with the intent of making assorted homeware out of it, and started immediately on

potholders, following a pattern that one of the folks at a local needlework club showed me. The pattern is quite clever, but doesn’t really belong to me; anyway, it makes double-layer squares on the diagonal, shown at right. I made four before getting a little tired of doing the same thing; instead of just putting the overall project to the side, I decided to work out a similar pattern, with a double-layer and easy color changes, but in a different shape. What could be easier, I thought, than a circle? 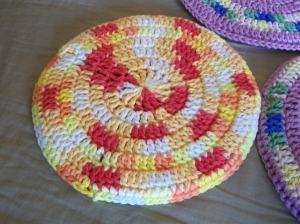 You can see that it wants to wave, even after significant prodding to lay flat

I’m posting this primarily to save y’all the trouble of finding out. Those of you who have done much crochet will know that circles that neither wave out or crimp up into bowls are actually a pain (as, indeed, I knew going into this, or at least should have known). I’d done some granny squares recently that started with 18 tc on a magic ring, with successive rows of (basically) dc adding 18 dc in every ring, so I thought this would be a good starting point. Unfortunately, this sucker started waving wildly (made a noticeably hyperbolic surface) at about the fourth row, so I ripped it out and tried with 16 as the magic number. Much better—this time it didn’t start waving much until about row 6, and could be made to lie flat with some effort, so I could not be bothered to rip it out. My next one, I started with 15 tc, but it was still a little wavy, so my third and final one, which actually lies flat without effort, starts with 14 tc.

You will need two different, coordinating colors of a worsted-weight cotton yarn, one ounce/46 yards (28 g/42 m) each, and a G6/4mm hook (or, size down one from the hook recommended on the yarn sleeve). This will make an 8.5″ (21 cm) diameter circle, or close to it.

You will need to know dc (double crochet), tc (treble/triple crochet), sc (single crochet), slip stitch, chain, and magic ring; if you don’t know magic ring, there are lots of tutorials around including one I made in the first steps of this pattern: granny_slippers.

Detail of the 14-stitch potholder

Note: At a higher level of abstraction, this pattern is just a set of rows, each of which is 14 stitches longer than the row before it; the increases are evenly spaced, and line up between (not on top of) the increases in the previous row. If you can’t see the forest for the individual stitches, just keep that in mind and you’ll be fine.

Note the second: While you work on it this potholder will be a bit wibbledy—at first it will try to form a bowl, and later it will try to form waves in the outer edge. It does come together as you bind it with the last row and lies quite flat when finished. If it’s too wibbledy as you work, though, and you’re getting nervous, I won’t be offended if you rip it out and try a different number of stitches; 13 or 15 may work better with your individual crafting idiom.

Note the third: The potholder is two layers primarily so that it will provide better protection—crochet stitches leave fairly large gaps in the fabric, which the second layer will fill. The pattern will also work for a single-layer circle, if that’s something you want, but don’t use it as a potholder. Also, don’t use synthetic fibers for potholders, as they melt—usually I am all for changing up yarns, but cotton is what you want for kitchenware as it cleans better than wool and handles heat better than synthetic. 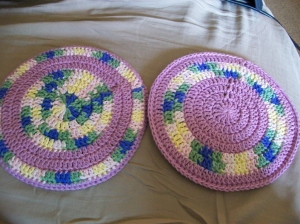 Note the fourth: The two sides of the potholder will both be equally presentable, depending on your yarn choices; note that the two potholders in the image at right are made the same in terms of colors, and I have put one facing “up” and the other “down” to show both sides.

Note the fifth and final: You can also use these as trivets/coasters, dishcloths, etc., although as with anything I make by hand I would be careful not to use them on anything that will stain.

Since my last journal post, I finished my green dress and my knitting, and then spent a while blocked and not really wanting to start anything new. Now I’ve recovered, partly thanks to getting a big box o’ yarn in the mail, and have way too many things on needles again, just the way I like it.

Thing 1: During the dead period, I did still want to do some crafting, so I got out my needlepoint. Some backstory: around April of last year, I got myself a printed needlepoint kit from the store because I felt like learning a new craft. I rather enjoyed it, and finished the 5″x5″ piece in good time. I wanted to get a new kit and continue needlepointing, but I had a problem: the needlepoint kits you can buy in your average craft store are desperately twee—much too cute and often more religious than I am happy with. So I thought to myself, self, how hard can it be to design my own? Just take a photo, tweak it a
little bit, and……and many, many hours later I had a couple hundred lines of image-

processing Matlab code, a map for a counted needlepoint project, and a printout of the colors of floss I would need. Because I am a giant dork, my starting image was the thing painted on the side of the ship in the movie Serenity, pictured above at right. As of today, most of a year after this project began, it looks like the photo at left; the whitish areas are still to be filled in. This project has been agonizing. Largely in a way that is a source of lessons learned, and I’ve already tweaked my Matlab (actually, Octave, as I lost access to my matlab license in August) program to make the next project much, much easier. Still, I hate to waste all the effort I’ve put in so far and start a new needlepoint before finishing this one, so on I slog.

Thing 2: I did a bunch of experimental tatting. This has already resulted in four pattern posts, so ’nuff said, but here’s a picture of a bunch of tatted scraps. There’s Cluny leaves, one nested ring, a bunch of Josephine rings, hearts, split rings, spiral chains, and some plain old ring and chain drafting in there.

Thing 3: I started on a pair of slacks that I’ve been planning since before I started this blog. They’re in a heavy black material that is the best match I could find to the suit jacket I have, but the material is heavier than I really bargained for so it’s slow going. I’m even contemplating breaking out the sewing machine to finish it. Anyway, I’m using Simplicity 2860, modified to have a side zipper and in-seam pocket.

Thing 4: I decided what to do with some of the pretty fabric I got last time I went to the store: I’m making a ruffle-front blouse from McCall’s M5929. I’ve used this pattern before to make a linen blouse that is roughly the dressiest thing I own, as well as reasonably comfortable, so I am rather fond of the pattern. We’ll see how it does in the floppier cotton. I’ve done the major seams, but have yet to do all the fiddly bits, which is the majority of this pattern.

Thing 4: My huge box o’ yarn arrived, and I immediately set to work: the majority of the yarn is worsted-weight cotton with which I intend to make a number of potholders/trivets/dishcloths, as well as to use for skill-share parties to teach my friends to knit and crochet. The pattern I have for potholders does well with multiple, coordinated colors, so I’ve separated the yarn into bunches:

with some left over skeins that don’t really go with anything else.

Thing 5: Because I can’t leave well enough alone, I decided to cast on a new shawl in sock yarn. I got a bag of 10 skeins of random colors of the Serenity sock weight yarn that I love so much, and am still thinking about what to do with all of it, but two of the skeins in the same colorway are just begging to be a shawl. It’s the “surf” colorway, and I am making Evelyn Clark’s Swallowtail Shawl rather than drafting my own pattern this time. I am a little short from the amount of yarn it calls for, and don’t see an easy way to reduce the pattern, so I am planning to do the edging in white sock yarn, depending where I run out. Right now I am about 15 rows in and liking the pattern pretty well.