Since my last journal post, I’ve mostly been sewing. I finished the paisley shirt, started and finished the patchwork shirt, cut fabric for two more shirts, and am halfway through sewing one of them. I also did a bit of tatting and finished the slippers mentioned. You’ll have to forgive the mirror-selfies in this post, as I wanted to show both shirts on, and my auxiliary photographer isn’t available.

Paisley shirt: this is, as previously mentioned, Simplicity 3750. I’ve modified it to be a little longer, and instead of making the sash/tie ends out of a contrast fabric, I just got a wide ribbon and used that—it saves effort and makes the bow less bulky; the first one I made from this pattern, I made entirely to instructions, and the big bow in the back would dig into my spine whenever I sat against the back of a chair, to the point that I would get nauseous and achey. I didn’t have that problem in the first day of wearing this shirt with the ribbon, and I took the precaution of making the ribbon long enough to tie in front (or in back). Pictures: shoulder detail (tied front), shirt front (tied front), shirt back (tied back), bust detail (tied front), matching scrunchie. 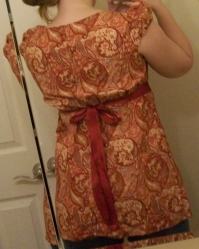 I made a matching scrunchie using the same fabric and some bog-standard sewing elastic; I am not terribly happy with the results, as the elastic has less stretch (and therefore, since I measured to the fully-stretched size needed, less grip) than normal scrunchies. It does well enough, but I’m not happy enough to post a tutorial on it yet.

Patchwork shirt: Simplicity 1462, which is a princess-seam shirt with raglan sleeves. Princess seams mean that the pattern has a larger number of smaller pieces than is the case for darted or unfitted shirts, so I decided to try this one out in patchwork. The side pieces and collar are small enough to make from quarter-flats, and the sleeves, front and back are large scraps from old projects. I like how this came out, especially for fabric that I had on hand; some of the color matching is not ideal but it is certainly good enough for wearing outside the house, if not to work. One alteration from the pattern: I omitted the zipper, and erred on the side of sizing up, making this a pullover shirt; the pattern works well for this. Pictures: shoulder detail, front, side, back. 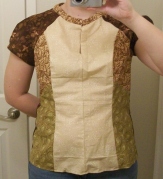 The two shirts I’ve cut fabric for are a) the same pattern as the patchwork shirt, but in a bright-red floral print, and b) a tunic with a keyhole neck in a dark-cornflower-blue jersey knit that I bought a while back and have had kicking around. The pattern calls for non-stretch fabric (and a zipper), so we’ll see how it does; the knit fabric has been kicking around because I don’t really like any of my knit-specific patterns enough to make another right now, so nothing really lost if it doesn’t work out.

Tatting: in the process of writing up the headband tutorial, I needed to make some rings and chains for phototutorial purposes, but I didn’t really have good colors on hand for a 4-color headband, so I actually modified the pattern to make a 6-color rainbow headband. It’s basically the same as the 4-color one, but with an added strip in the middle; the added strip alternates between rings facing forward in color #3 and rings facing back in color #4 by switching the needle from strand 3 to 4 (or, as I did, using two needles). The tie ends are also extended—after I ran out of skeins 1 and 6, I still had a bunch of skeins 3&4 left over, which I tied around the ends of skeins 2&5. Photos: full headband, detail of center. 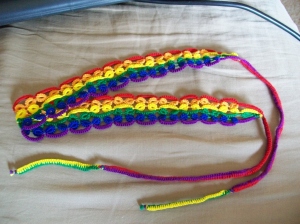 Slippers: I’m not going to rehash what I said in my last journal post, but I do have some lovely photos of the finished slippers:

I ended up doing the heel rather differently than in the pattern (see granny_slippers), as an experiment; instead of the gradual short rows and decreases, I did an abrupt short-row heel similar to the knitting technique, where between one full row and the next is a set of short rows decreasing in length by two stitches per row until the row is 5 stitches long, then increasing in length again. One immediate problem is that this left a row of gaps down one diagonal of the heel, which I had to fill in by working a chain down the row of gaps. Overall, I’m still not sure how I feel about this technique vs. the first one I worked out—it looks a lot more professional, but it doesn’t seem to fit/hug my foot as well as the first pair, although this may partly be due to the change of fibers (cotton being less stretchy/springy than the acrylic).

I’ve also made some slow-but-steady progress on the knit shawl, but nothing worth mentioning in particular.